We announce the line-up of the First Look - TV Pilots Competition of the 27th edition of EnergaCAMERIMAGE International Film Festival.

Competition under the patronage of Jakbyniepaczeć 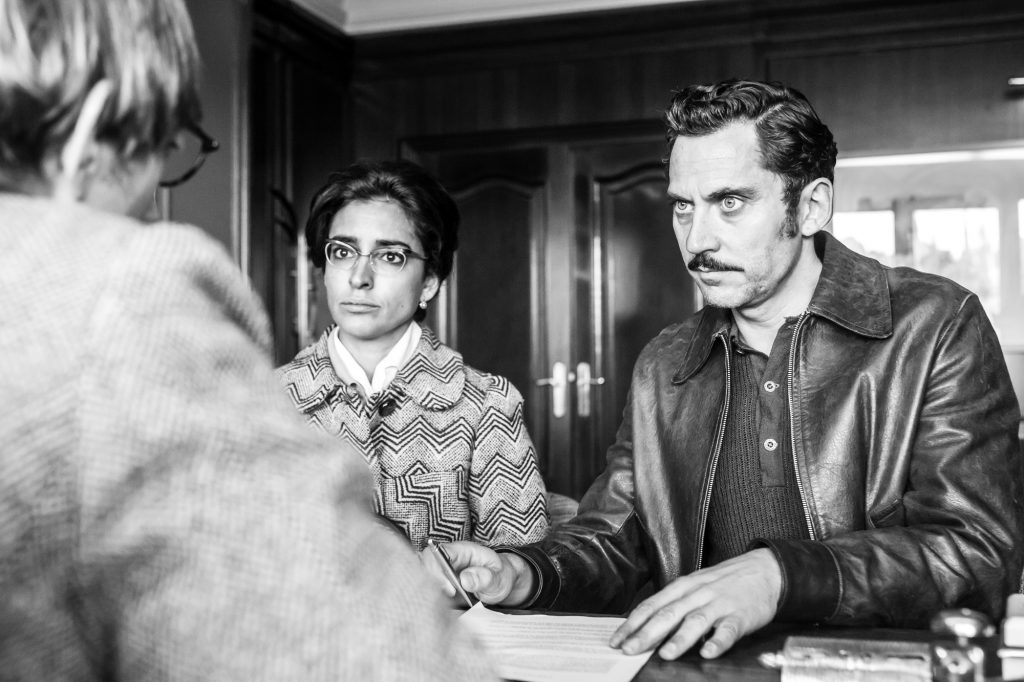 Spain, 1961. General Franco’s regime suspects that glamorous parties organised by American actress Ava Gardner, who has been living in Madrid for a while now, are simply a pretext for nefarious Communist and anarchist meetings that could endanger the country’s future. Enter Ana Mari, a spinster loyal to the government who receives an offer she cannot refuse. Under the guise of a maid, she will start to infiltrate the impressive residence of the Yankee troublemaker and report anything out-of-the-ordinary. The woman has no experience or training in espionage, but she certainly needs the money, and does not want to make her government angry, so she happily takes the job. The problem is that this whole double-identity thing requires her to pretend to be the radiant wife of an irritating man who likes to think he is some sort of rebel without a cause, while the hedonist, life-affirming alcoholic Gardner makes Ana Mari feel a woman’s needs once again. How can she sniff around and serve her country when her body and senses have other plans? 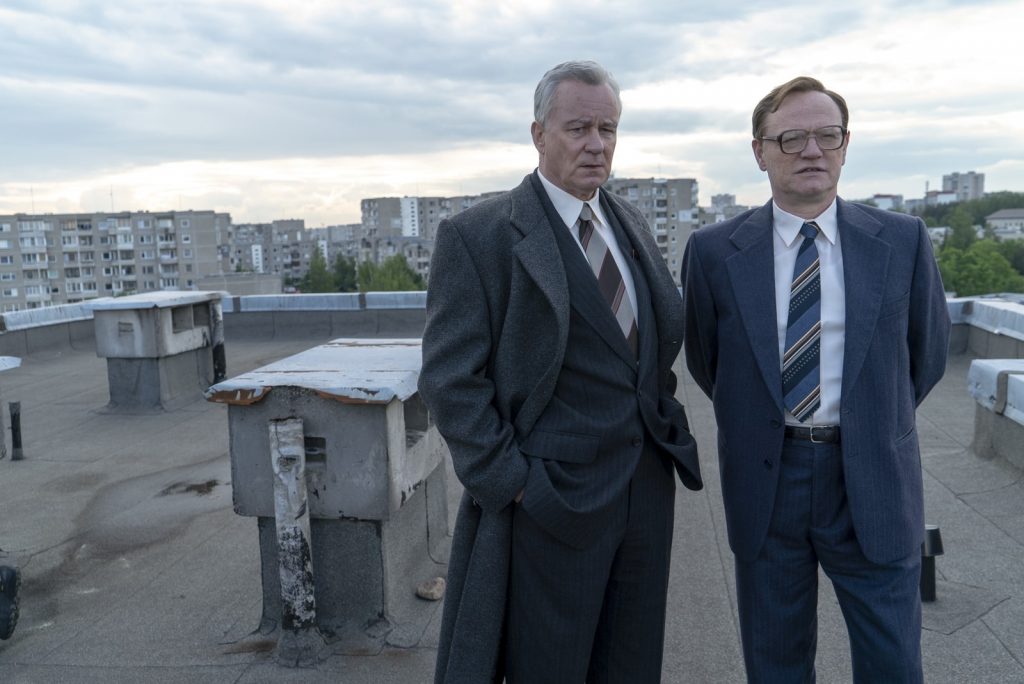 Still from "Chernobyl,"
courtesy of HBO

Night-time. A woman looks silently at her husband, who is sleeping peacefully. One of the many routines in a life filled with what is expected. Outside the window, somewhere in the distance, there are sudden explosions. The aftershock arrives in a matter of seconds. The husband and wife both look in astonishment at the source of the explosion, at the column of bluish light beaming into the sky. Minutes later the husband, a firefighter, must make his way there, to put out a fire on a roof of the Chernobyl Nuclear Power Plant. Nobody is aware of what is really going on. The truth is that one of the nuclear reactors inside the plant exploded, and the column of light beaming from it will soon inspire terror all over Europe for months to come. But now, brave firefighters start to extinguish the fire, not knowing that they are entering the circle of hell. Hours later, the people of the nearby town of Pripyat stand unperplexed, watching as ash falls down on them from the sky. Meanwhile in Moscow, some very important people try to hide the truth from the world. It will come out eventually, but at what cost? 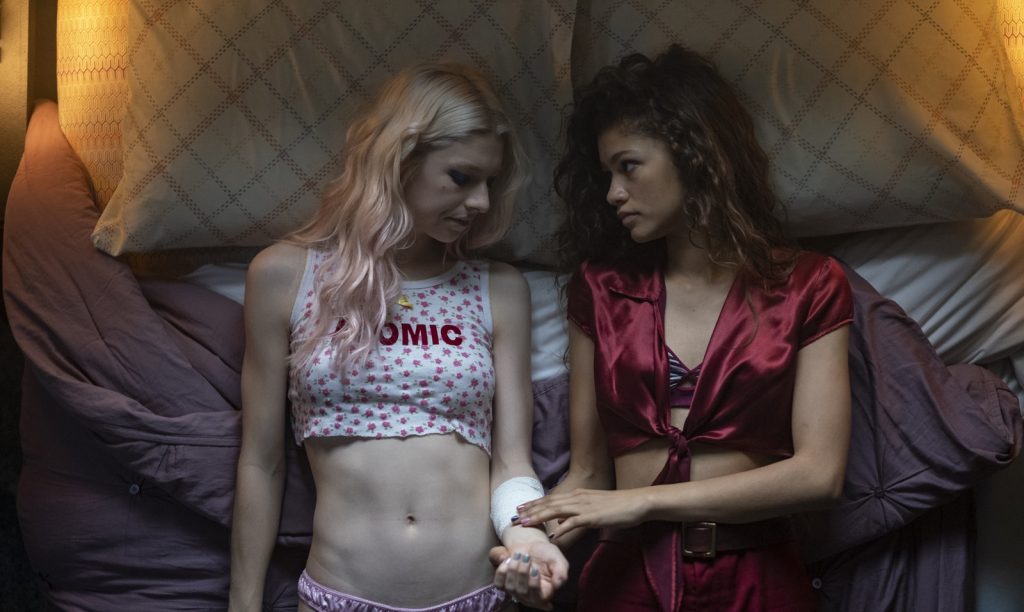 Rue is a teenaged drug addict, who returns from rehab far from being a changed person. Despite the promises she makes to her mother and younger sister, she quickly re-immerses herself in the world of substance abuse. Not because of some unrequited love, nor due to the pressure of her peer group, but simply because Rue wants to not to feel anything anymore. The girl is lost in the shattered world she and her school friends and enemies inherited from their parents’ generation. While trying to understand who she is under masks she puts on in front of others, Rue makes a number of poor decisions that could lead her to premature death - unless a person turns up who will try to see the real her, hidden beneath all of the false stimuli of “here and now. Euphoria is a tale set in a recognisably modern world, and depicts many controversial aspects of what it is like to be a teenager within it, but it also enters a dialogue with once-subversive tales of generational anger, from Rebel Without a Cause to John Hughes’ bittersweet high school films. 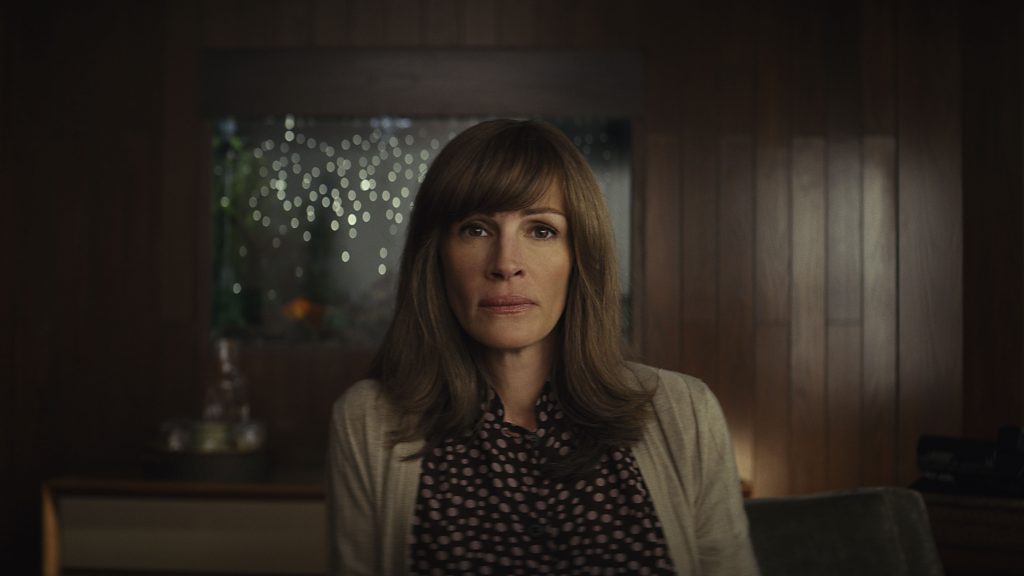 Heidi Bergman starts working in a private facility designed to help war veterans transition back to life within the confines of the reality they have once left behind. She tries to support the soldiers while following the programme’s rigid set rules, whose usefulness she constantly questions. Additionally, she has to take calls from her boss and listen to his aggressive ranting, which suggests the man is more interested in data-mining than the soldiers’ well-being. Four years later, Heidi works as a waitress in a local diner and lives with her mother. One day, her peaceful and predictable world is invaded by an investigator from the Department of Defence, who enquires about her former work. Feeling that the federal agent is holding the truth from her, the woman is reluctant to reminisce about the past, and seems to have forgotten many names and events. She is used to such treatment, as she felt constantly manipulated in the facility, although the visit makes her suspect that, without realising it, she had been a part of something truly terrifying. 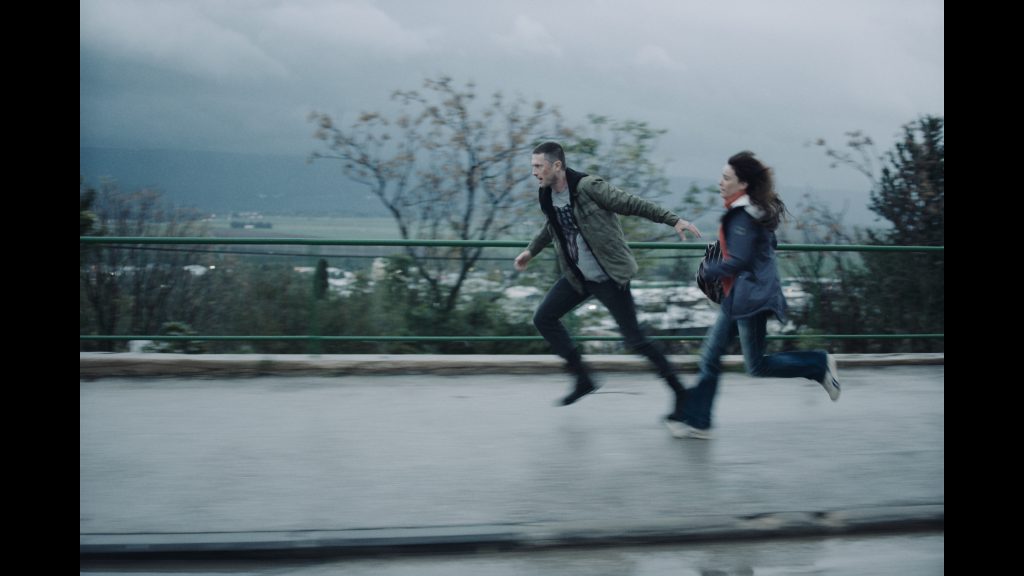 Anat is an idealistic young woman, who has just started a job as a social worker. She wants to help people who are down on their luck, and who simply need some human warmth and professional advice, though her naivety and lack of experience makes her emotionally unprepared for what is to come. His name is Niko, he has sad eyes and a harsh personality; he has been recently released from prison, and he gets Anat emotionally involved. The girl loses perspective, and crosses many physical and ethical boundaries that should not be crossed. At one point, she even jeopardises the reputation of people close to her. While Niko tries to reciprocate the girl’s devotion, he cannot escape the ghosts of his turbulent past, and becomes entangled once more in the world that nearly destroyed him before. Anat will be forced to make a difficult decision: whether to risk her future for a stranger who may turn out to be a die-hard criminal, or to suppress her conscience and take the safer way. 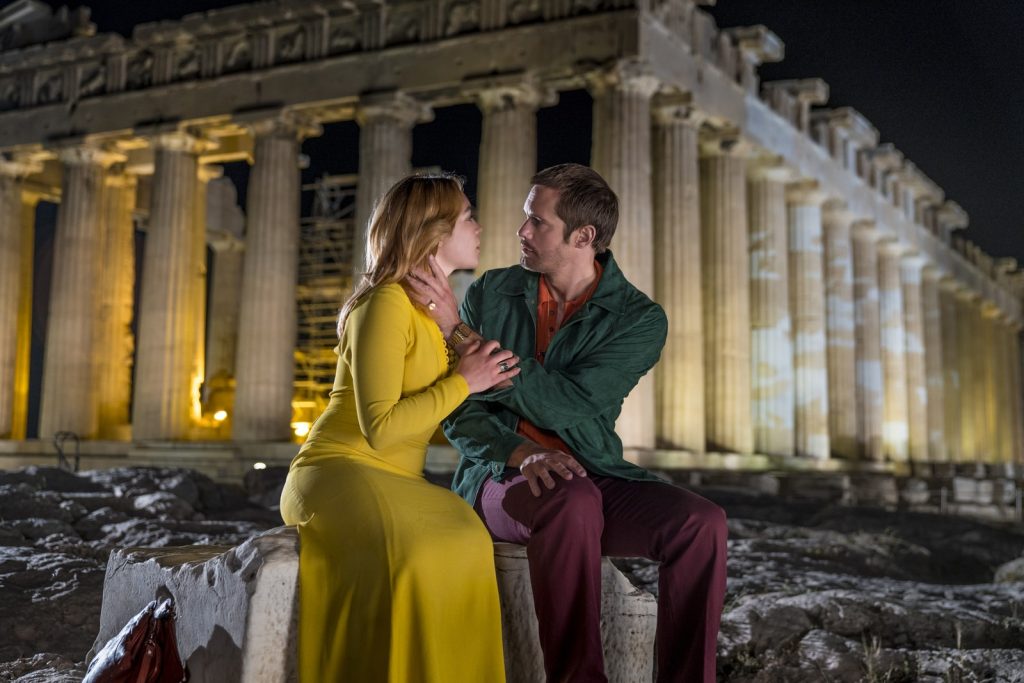 In the world of spies, double identities, triple agents, false passports, and the blurred distinction between what is real and what is merely fiction, the hardest thing to achieve is retaining at least some small part of one’s original self. This is the problem that Israeli spymaster Kurtz faces while preparing a multi-layered operation to annihilate a brutal Palestinian terrorist. This is also something young actress Charlie experiences, even before she gets involved with the world of espionage, of which she knows nothing, but which she is able to explore due to her limitless imagination and talent to forge new identities with her words and gestures. The final battle is nigh, and it will probably leave a lot of collateral damage. But firstly, all of the stars of the upcoming spectacle have to seduce one another, and present their capabilities of blending what is true and false into something else entirely. One thing is constant in the world of spies, however: there is not one truth, just a myriad of individual truths. 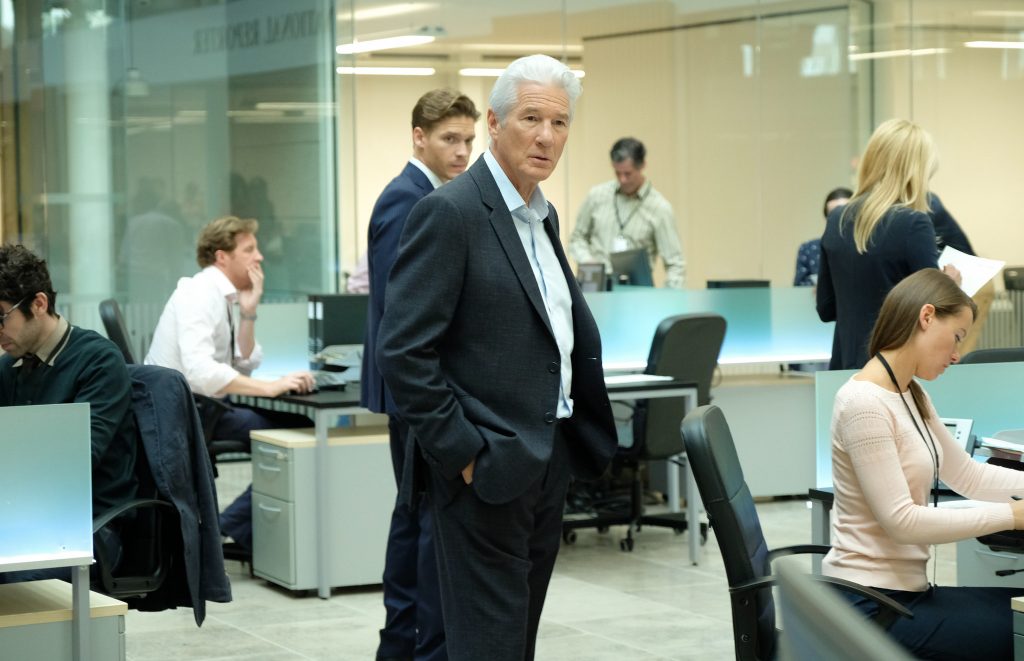 Still from "MotherFatherSon,"
courtesy of HBO

Max Finch is a cold-hearted media mogul with seemingly unlimited political reach, the type of person who, after walking into any room, emanates such a commanding presence that people immediately lose their confidence. He is manipulative, cruel, and, at the same time, a devilishly charming and elegant businessman for whom the world is a huge playground, in which his are the most important toys. At the personal level, however, Max’s life is simply disastrous, especially when it comes to his only son, Caden, who he had wanted to shape into his successor. The young man was put in charge of the popular newspaper The National Reporter, but could not stand the pressure and became a walking, talking caricature of everything that his father ever stood for. Max’s relationship with his ex-wife Kathryn is also quite poignant. An unexpected family tragedy will make these three characters come together in a way they never suspected was possible. Will the distant and scheming Max be able to find some traces of humanity to save those closest to him? 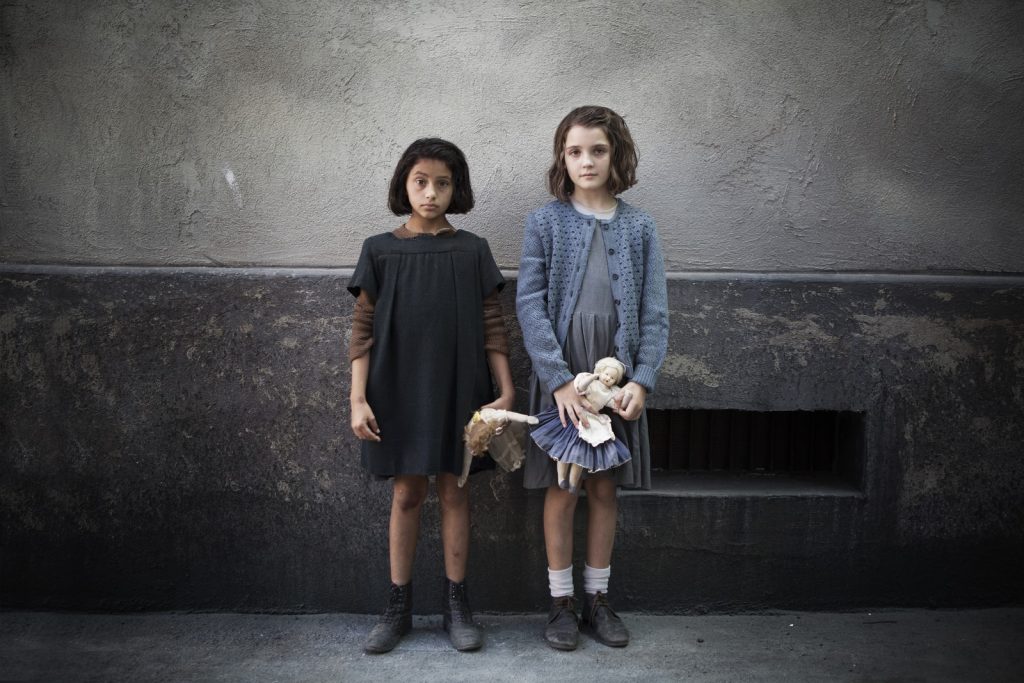 Still from "My Brilliant Friend,"
courtesy of HBO

Two young girls, curious of the world’s many mysteries, sensible Lenù and spirited Lila, try to grow up on their own terms in poverty-stricken 1950s Naples. Two young women with lots of energy and potential, whose emotional and physical adventures make them discover the ephemeral beauty of friendship and the excitement of numerous “first times.” Things do not always go as planned, since Lenù and Lila live in a patriarchal society, built upon strong men’s domination over meek women. Not only that, the girls cannot even choose the ones they would like to spend their time with, or fall in love with, for they are forced to struggle for even the smallest opportunities in the mean circle of poverty, violence, desperation, lack of education, and class divisions. Despite all of that, despite the cruelty of fate, and the negligence of the society that surrounds them, Lenù and Lila do not stop dreaming their beautiful dreams of higher education or professional success, while their small victories give them the hope to not give up. 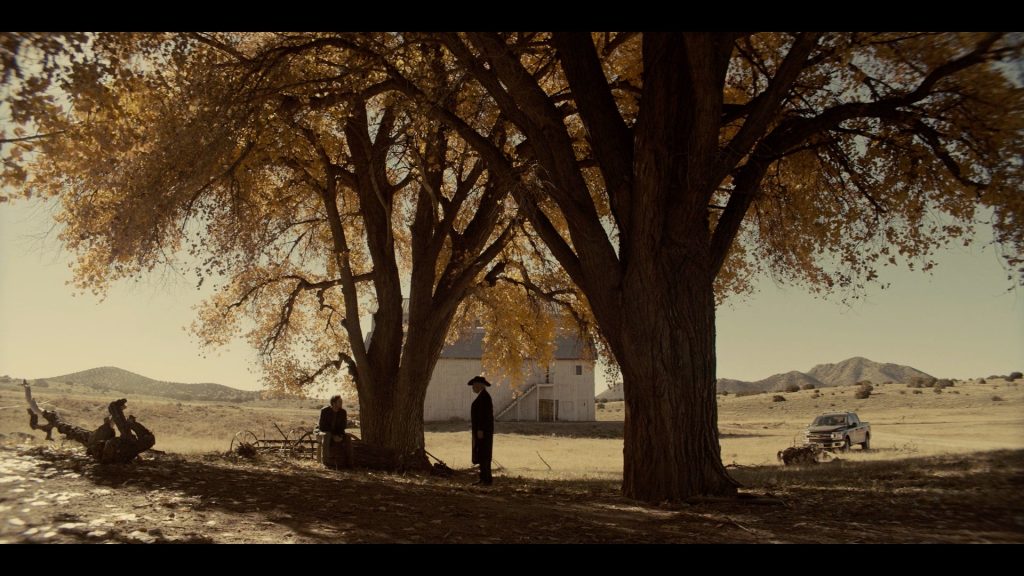 How many shrewd and cautious con-men does it take to change a lightbulb? The answer to that question may lie in the reach of guilt-ridden James, who comes to picturesque New Mexico only to find himself part of a scam involving an ambiguous pastor, his enigmatic wife, and their disinherited son who seeks vengeance. There are many stakes here, the obvious one being money, which is most likely to be made through deception in a certain church devoted to helping people with different kinds of addictions and problems. In the beginning, the job seems nice and easy, especially for a seasoned con-man like James, but when the victims turn out to be veteran con-men themselves, things get complicated, for it is quite difficult to con people in the world in which people conning other people cannot distinguish people conning people from ordinary people, the world in which everything is possible. It is possible, then, that no one will change the damn lightbulb.

WHEN THEY SEE US 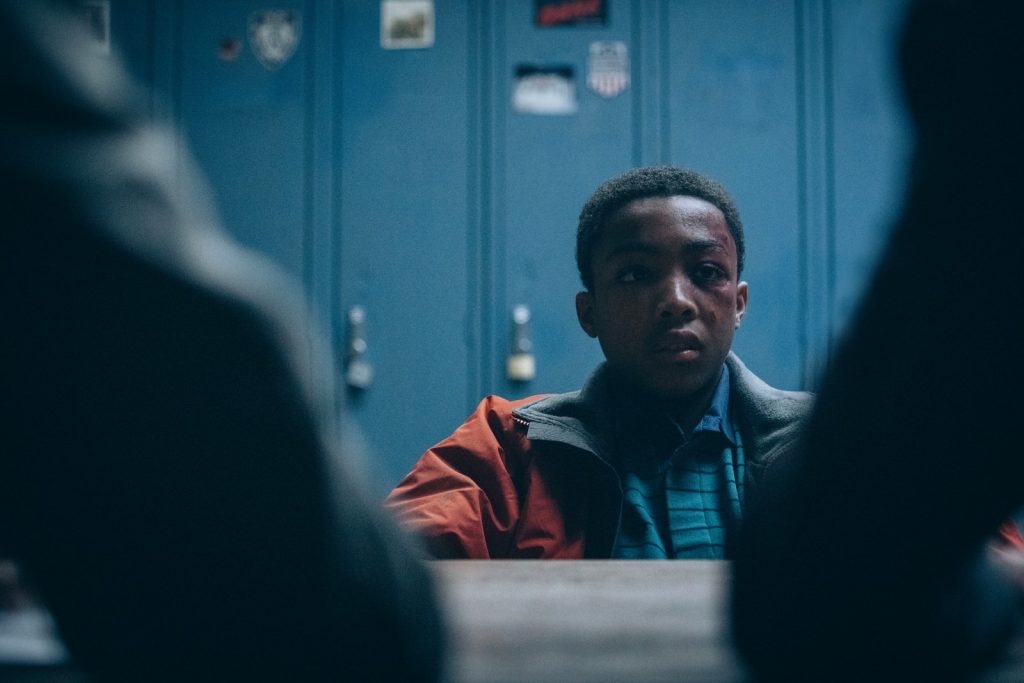 Raymond, Kevin, Antron, Yusef and Korey are ordinary teenagers living in New York’s Harlem, who happened to be in the wrong place at the wrong time on 19 April 1989. They are arrested and accused of a brutal attack and rape on a young white Manhattanite jogging through Central Park. When they are thrown into the vast abyss of the American criminal justice system, they do not know how to defend themselves against tough cops and golden-mouthed prosecutors, who are under huge pressure from the bloodthirsty public. Fearing jail-time, some of the teenagers confuse their testimonies, while others are manipulated into turning against each other. At the same time, the people who should seek justice seem to shape facts into a narrative of a vicious, race-related crime. While the boys are paralysed with fear, their parents feel helpless and can only watch how their children’s lives become a media spectacle. This is the beginning of the so-called “Central Park Five” case that will forever change the way in which the New York justice system is perceived.