Energa ORLEN Group extended their strategic sponsorship contract with Tumult Foundation until the year 2022 in support of EnergaCAMERIMAGE International Film Festival. This year’s edition of the event is scheduled for 14-21 November in the city of Toruń.

– EnergaCAMERIMAGE is one of our flagship sponsorship projects. It’s a truly unique event with a global reach that promotes Polish culture abroad. We are proud that as of 2017 Energa can support this well-established event that has earned high esteem among filmmaking professionals and movie stars – said Adrianna Sikorska, Vice-President of the Management Board for Communication of Energa SA.

This year’s edition of EnergaCAMERIMAGE International Film Festival is scheduled for 14-21 November in the city of Toruń. Necessary festival preparations have been well under way since the beginning of the year 2020, with a focus on building up an extensive program of screenings, including, as in previous years: competitions for feature films, Polish productions, documentaries, TV pilots, debuts, student etudes and music videos. The festival will also feature film reviews, special screenings, Q&As, workshops, seminars and exhibitions. Due to the global SARS-CoV-2 virus pandemic, it is likely for some of our screenings, meetings, workshops, seminars or press conferences to take place online. Participation in those events will be possible for holders of an online entry card – a new feature at EnergaCAMERIMAGE.

– Working with Energa is an experience of professionalism and mutual understanding. The company’s representatives approached us with great competence and willingness to engage thoroughly in our discussions and cooperation, seeing our festival as both a source of positive artistic energy and a promotion platform for Poland abroad. Providing much more than just financial support, Energa has put forward a number of inspiring ideas. I am very pleased that our partnership will be continued, putting our festival among the family of ORLEN Group – one of the most recognizable Polish brands in the world. We are the largest international film event in Poland and thus a perfect place for discussion about cultural patronage. We strongly believe that our collaboration will continue to bring satisfaction and mutual benefits to the parties involved – said Marek Żydowicz, director of EnergaCAMERIMAGE. 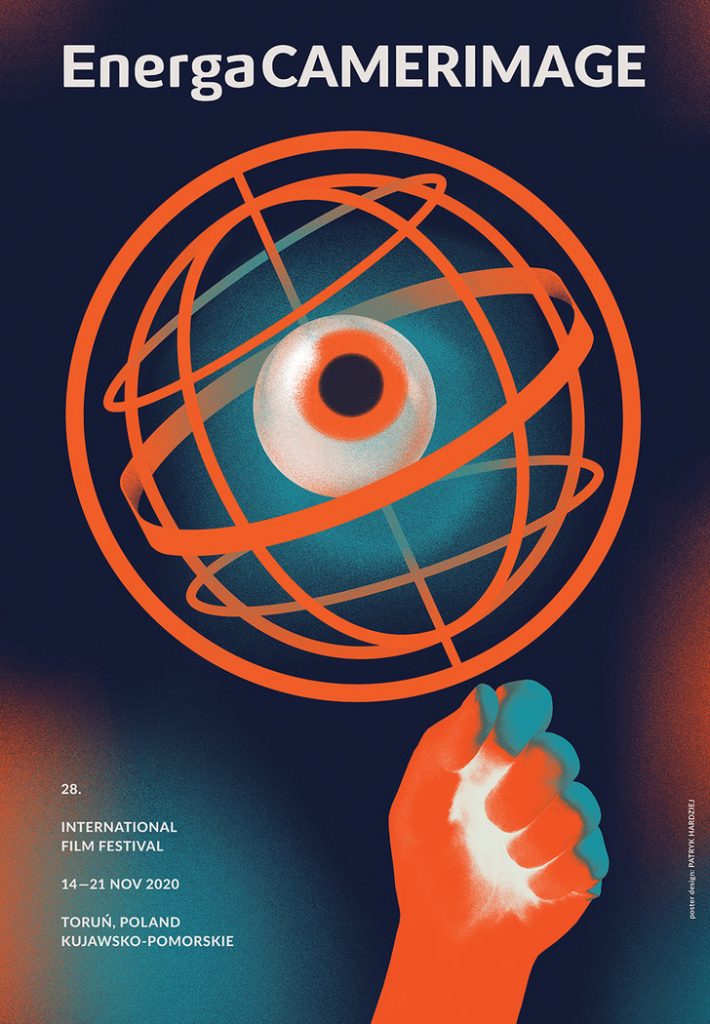 The author of the poster for this year’s edition of EnergaCAMERIMAGE is Patryk Hardziej, Tri-City-based multidisciplinary illustrator, graphic designer and researcher. He is a lecturer at the Academy of Fine Arts in Gdańsk and founder of the Art of Design courses and Karol Śliwka Foundation. Patryk has worked with such brands and institution as: Amnesty International, British Airways, BMW, Costa Coffee or Pepsi.

The centerpiece of the poster is the astrolabe, the most intricate device used in Copernican times to describe the unknown universe. It provides clear association with the city of Toruń, the birthplace of the festival. The eye locked in its center embodies the essence and uniqueness of EnergaCAMERIMAGE – the festival’s universe revolving around visual sensitivity magnified by acute perception and the sense of seeing. The metaphor goes deeper – the intentional use of a tool allows its holder to measure what is new, significant and previously undiscovered. The festival is a meeting place for a community that sees the worlds created by the painters of light, who make conscious use of technological advances, as sources of inspiration, wisdom and truth, but also of pure energy and entertainment.

ORLEN Capital Group, with Energa as one of its members, is the largest company in Central and Eastern Europe listed in the prestigious global rankings of Fortune Global 500 and Platts Top 250. It operates in six domestic markets: Poland, the Czech Republic, Germany, Lithuania, Slovakia and Canada. The group controls modern, integrated refining assets capable of processing over 35 million tons of various types of crude oil annually, while retail sales are carried out through the largest network of over 2,800 petrol stations in Central and Eastern Europe. The commercial offer of ORLEN Group features over 50 top-quality petrochemical and refining products available on 6 continents and in over 110 countries.

PKN ORLEN is also a key player on the energy market in Poland, with a capacity of 3.3 GWe, 1.38 GWe of which is installed as part of Energa’s production assets. In terms of mining and extraction reserves, the company has its own oil and gas (2P) resource base, which, at the end of 2019, amounted to 197.3 million BOE. PKN ORLEN is a leading entity with a focus on creating one company with diversified revenues and a strong foothold in the European market. In April 2020, PKN ORLEN acquired Energa Group and in July 2020 it received a conditional approval from the European Commission for the acquisition of LOTOS Group and initiated the process of PGNiG acquisition.

39 percent of installed capacity in Energa’s production assets comes from RES, which is in line with ORLEN Group’s energy strategy, focused strictly on low- and zero-emission energy sources. Distribution is another strong and stable sector of Energa’s operations. The distribution network consists of power lines with a total length of 191,000 km, covering an area of nearly 75,000 km2, which amounts to approximately 24 percent of the entire area of the country. In the first half of 2020, Energa supplied 10.7 TWh of electricity to consumers.