THE OFFICIAL POSTER OF EnergaCAMERIMAGE 2022 IS HERE!

In exactly six months, on November 12, the jubilee, 30th edition of the EnergaCAMERIMAGE International Film Festival will start. It is a perfect moment to present the jubilee layout of the festival poster by Piotr Jabłoński, whose graphic metaphor closes the story contained in his previous creations for the 2017 and 2019 editions of the Festival.

The frogs that were brought back to Toruń, especially the golden ones, have settled there for good, to celebrate the 30th anniversary of the largest international film festival in Poland, of which they are a symbol. Together with the sound of the well-known and so characteristic for EnergaCAMERIMAGE music motif, they improve the last element of impeccable clothing, to soon become the heroes of the galas and be presented to the most distinguished laureates. In this complicated and unpredictable world, the real, proud winner is always the Golden Frog, who is the festival's embodiment of sensitivity, beauty, wisdom contained in film stories and compassion with other people. 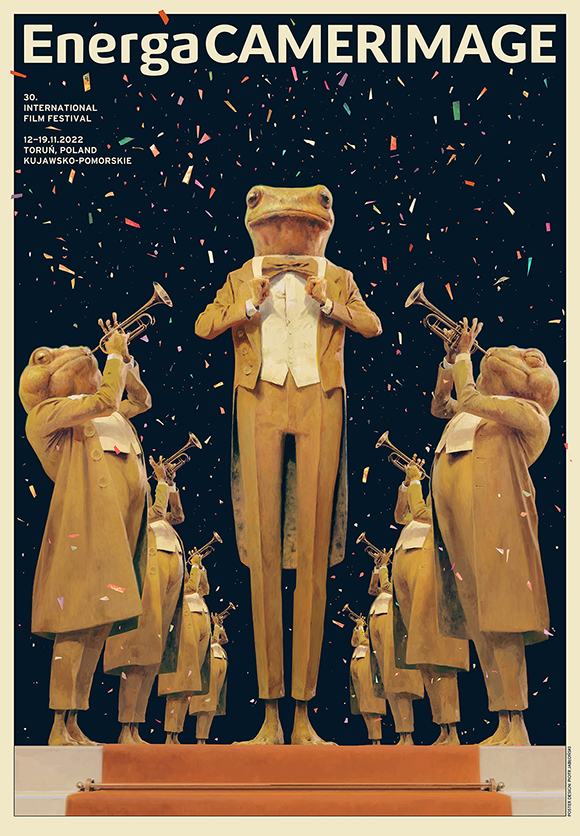 ENERGA Grupa Orlen - the Title Sponsor of the Festival - will be responsible for the positive energy of the jubilee for the sixth year in a row. The 30th EnergaCAMERIMAGE International Film Festival will be held on November 12-19, 2022 in Toruń.