LONDON — 1 August 2022: FilmLight has welcomed further high-profile creatives from across the world to complete the judging panel for the 2022 Colour Awards, which recognise the finest work from colourists using any technology platform and working in any genre. The awards deadline has also been extended, and submissions will now close to the global colourist community on 7 August 2022.

"The whole process of colour correction is extremely challenging and creative" commented K. K. Senthil Kumar, one of FilmLight’s newest jury members. "Colourists give their magical touch to enhance the visual expression of the DP and it is high time they are brought into the limelight from the darkrooms." 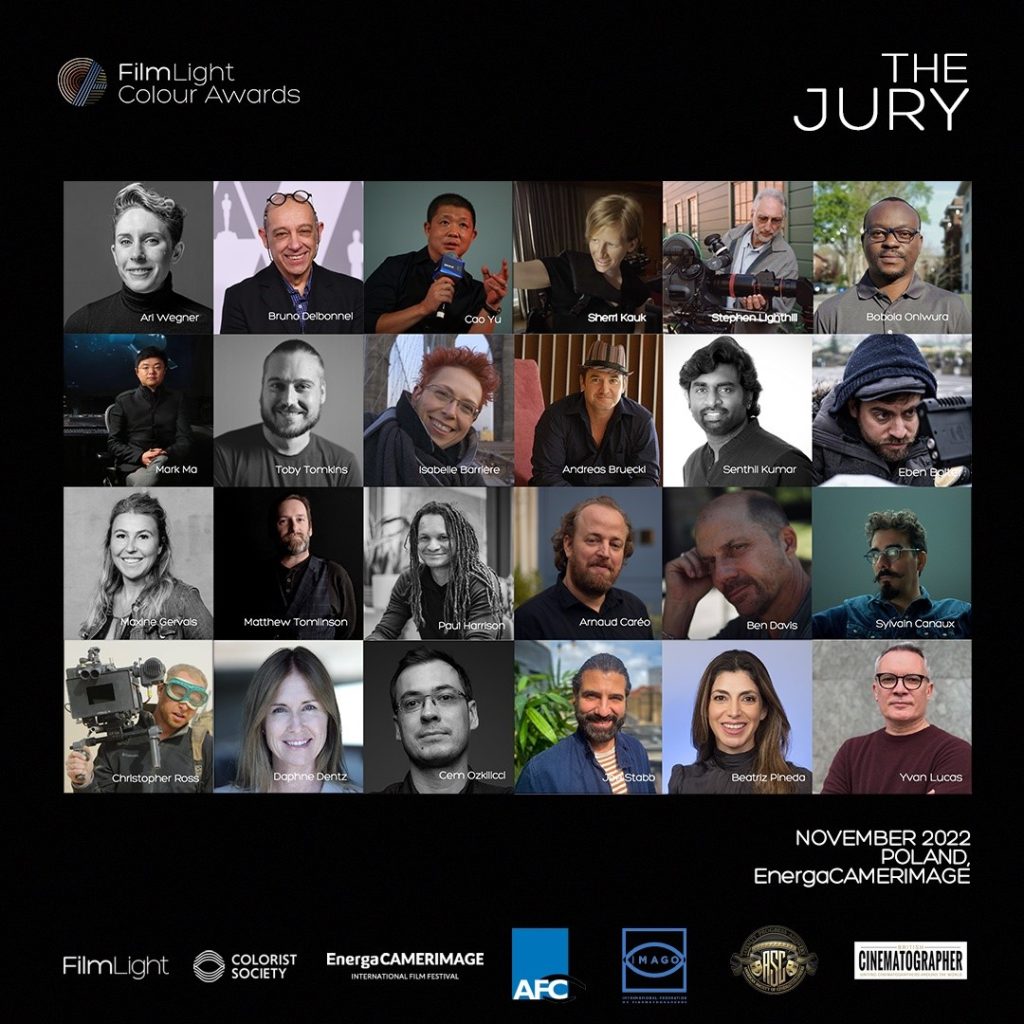 The latest members of the 2022 Colour Awards jury include:

Bruno Delbonnel, ASC, AFC, is a distinguished French cinematographer best known for his work on the films of the Coen Brothers, Tim Burton, Sokourov, Jean-Pierre Jeunet, Joe Wright and more. Delbonnel’s accolades include a César Award, a European Film Award, six Academy Award nominations, four BAFTA Award nominations and the Silver Frog at the 2021 EnergaCAMERIMAGE Festival of Cinematography for his work on The Tragedy of Macbeth.

Benjamin Davis, BSC is a British cinematographer often credited with a crucial role in creating the visual tone of the Marvel Cinematic Universe, having worked on the Marvel Studios films including the recent Eternals. Davis has also proven his versatility by shooting intimate dramas such as The Best Exotic Marigold Hotel and Three Billboards Outside Ebbing, Missouri.

K K Senthil Kumar is one of India’s top cinematographers, predominantly working in telugu cinema. His collaboration with SS Rajamouli has given the film industry blockbusters like Eega, Baahubali 1, Baahubali 2 and RRR. He has also won many accolades for best cinematography such as SIIMA, Nandi, Filmfare, CineMAA and Zee.

Isabelle Barrière opened her own facility in Paris in 2012, and has since worked as a digital colourist for TV, cinema and web on documentaries, fiction, music videos and commercials. Her background and interest in new technologies make her a passionate interface between DPs and directors, and she is often involved in projects right from the pre-production phase.

Arnaud Caréo is a French technical director who contributed to the creation of Le Labo Paris, where he is now leading the technical and colour pipeline. Throughout his career, he has developed a deep understanding of the connection between the technical and creative sides of post-production. In 2021, he was a FilmLight Colour Awards winner for his work on look development tools based on  manipulation.

Sylvain Canaux has run the colour suite at St Louis in the heart of Paris since 2012. Specialising in commercials and short-form content, he gained recognition for his work in the beauty, fashion and luxury industries. He collaborates with famous brands and photographers such as Peter Linberg, Paolo Reversi and Solve Sundsboe for Chanel, Dior and Louis Vuitton.

Beatriz Pineda is senior director, product strategy at SSIMWAVE. She has vast experience in the media distribution supply chain across Latin America, the Caribbean and Brazil and has helped companies such as HBO and Sony to optimise their media distribution pipelines, introducing innovative products in a highly demanding industry.

Joe Stabb is head of creative DI and senior colourist at Fifty Fifty in London. With a cinematography and photographic background and 17 years’ experience in colour grading, he has built an enviable credit list across notable scripted and unscripted programming, including a whole host of Netflix originals.

Cem Ozkilicci has worked in various locations, including Scandinavia, Canada and the US. He started off his colour grading career by working with telecines, eventually moving to non-linear grading where his Flame background helped him to push the limits of the grading toolsets. Cem’s portfolio includes a variety of formats including commercials, feature films and episodics.

Paul Harrison, colourist and co-founder at Residence Pictures, has been continually ranked amongst the top three finishing artists in the UK throughout his career, frequently topping Televisual’s best colourist polls as well as winning successive BTAA awards for best colourist.

"I am delighted to join the Colour Awards jury for 2022" commented Benjamin Davis, cinematographer. “It’s hugely important to me as I feel the work of a colourist goes largely unrecognised. I have been working with colourists since they first appeared on the scene, as we moved away from the photochemical process, and can’t wait to see the submissions this year.”

The call for entries is still open and closes on 7 August. A shortlist will be announced in the autumn, with the winners unveiled in November at this year’s EnergaCAMERIMAGE Festival.

FilmLight develops unique colour grading systems, image processing applications and workflow tools that are transforming film and video post-production and setting new standards for quality, reliability and performance. The company’s streamlined metadata-based workflows employ robust products with cutting edge creative tools, allowing creative professionals to work at the forefront of the digital media revolution. Founded in 2002, FilmLight’s core business is centred on the innovation, implementation and support of its products—including Baselight, Daylight and Baselight Editions—in leading production companies, post-production facilities and film/TV studios around the world. FilmLight is headquartered in London, where its research, design and manufacturing operations are centred. Sales and support are conducted through regional service centres and qualified partners worldwide. For more information, visit http://www.filmlight.ltd.uk