Paris for those in love, Brussels for chocolate lovers, Rome for those fascinated with history. The picturesque, historical Toruń is a place which ideally combines all these things. A city famous for delicious gingerbread cakes, boasting the magical Old Town inscribed on the UNESCO World Heritage List, it delights its visitors with the original architecture of the Gothic townhouses, churches and red-brick townhall. The night panorama of Toruń is considered as one of the seven wonders of Poland.

In the silence of the medieval nooks and crannies, in the art galleries, museums, cafes and pubs hidden among the old walls tourists can breathe the atmosphere of the times of Nicolaus Copernicus, who was born here. The figure of the famous astronomer, his birthplace house, his impressive statue situated in the Old Town Square, are attracting annually over 2 million visitors.

Gourmets will head for the Museum of Toruń Gingerbreads. Since the 14th century Toruń has been famous for the tradition of baking this spicy delicacy. In the local museums not only can you listen to the legend of the gingerbread origins but you may also admire genuine old baking forms and ovens, and try your hand at making your own gingerbread cakes under the watchful eye of a master baker.

Despite its 800-year-old history, Toruń is a city of youth. The beauty of the Old Town, the Copernican tradition, the excellent educational facilities and the affordable cost of living are a magnet for thousands of students. They can choose from eight institutions of higher education including the biggest one – Nicolaus Copernicus University. The youngest enthusiasts of science will be fascinated with the interactive exhibitions and experiments presented at the „Mill of Knowledge” Modernity Center.

Fans of sports on the other hand attend, in their thousands, the great speedway motor racing events held at Motoarena, prestigious athletic competitions, and basketball and volleyball league matches played in Toruń Arena – a brand new sports and entertainment hall on Bema Street. 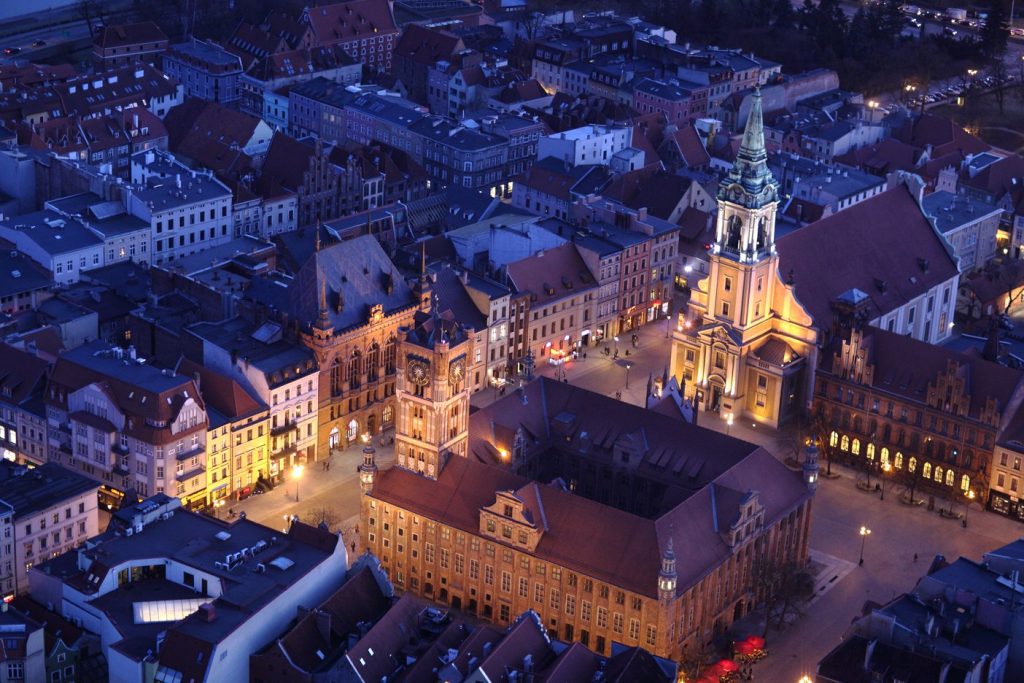 Toruń is also one of the most important cultural centers in northern Poland. Every year, numerous renowned festivals of theater, art, music, film, classical and contemporary art take place here. Every weekend you can attend an interesting concert, exhibition or spectacle. At the end of summer, Toruń attracts thousands of visitors from all over the world with its Bella Skyway International Festival of Light. For a few days the Old Town turns into a fairytale land of amazing spectacles of light and sound, and the city and its countless cafes, restaurants and open-air pubs bustle with life late into the night. The new iconic venue of Toruń which is a must-see point of every tourist's itinerary is the new Jordanki Culture and Congress Center. The irregular shape of this impressive edifice, designed by Menis Arquitectos, a Spanish architects office, houses a unique concert hall, and has won numerous architectural awards. In order to see it in its full glory, it is best to attend one of the various concerts held there, ranging from classical music to jazz, rock and pop.

Last year’s EnergaCAMERIMAGE Film Festival proved to fit perfectly into this cultural landscape of Toruń, organizing its 27th edition in the city space and having CKK Jordanki as the main Festival Center. Everything now indicates that it will stay here longer. Plans related to the establishment of a new cultural institution, the CAMERIMAGE European Film Center, and in the long run building a new venue that meets the needs of the Festival and serves the residents of Toruń as an unforgettable meeting place with the motion pictures, let us believe that EnergaCAMERIMAGE has finally found its safe haven where we will have the chance to further develop our festival and non-festival projects.

The next edition of EnergaCAMERIMAGE will be held
between 14-21 November, in Toruń of course!