We announce the line-up of the TV Series Competition of the 29th edition of EnergaCAMERIMAGE International Film Festival.

France, 1860s. The whole Continental Europe struggles with various iterations of the spirit of the rebellion, yet coal miners working in a mine in a small town in northern France live according to an old status quo. Whole families of men, women, teenagers get up every morning and go to the mine to toil in extremely hazardous conditions, some of them six hundred metres below the ground. They let well-dressed madams and their upper-class daughters believe they are happy because they have a roof over their heads, a purpose in life and even some free coal. When someone dies, they dress up, attend the funeral and make toasts in a local pub. And so they live, love and die in poverty while the owners of their mine count every penny and try to fight off the competition. One day, though, a young migrant worker replaces yet another miner who had died in the mine. He was sacked from his last job because he dared to try to establish a union which would protect the rights of the working folks. They do not know it yet, but the man will bring the wind of change into the town.

Most of her life Lisey Landon was mainly just the wife of her husband, the acclaimed fiction writer Scott Landon. She never complained about the arrangement, though. She felt happy and fulfilled, or so she had thought back then. After Scott’s untimely death Lisey cannot pull herself together, to the extent that although her husband is not physically there anymore, he is still more than alive in her head. The trouble is, Scott also lives in the minds and imaginations of many of his fans, including several fanatics who are ready to do everything to get their favourite writer’s final unpublished masterpiece into their hands. And even though Lisey does not want to share her version of Scott with anyone else anymore, Scott reaches to her from beyond the grave and makes her analyse their shared past and tackle the demons he had left behind. It is not easy, as Lisey struggles with her sister’s mental illness and experiences bizarre visions of the reality beyond the dream. Will she be able to learn the whole truth about her husband, or will she lose her senses while trying to do so?

MANDALORIAN, THE: CHAPTER 9: THE MARSHAL

The Mandalorian and Child are back, but it turns out there’s no rest for our favorite duo. Last we saw them, they were headed off to the stars after defeating Moff Gideon and his forces on Nevarro. This episode finds the armored hero, a.k.a. Din Djarin, on a mission to bring his young charge to the Jedi. Chapter 9: The Marshal is filled with great character moments, thrilling action, and more than a few surprises, making for a fantastic start to the second season. 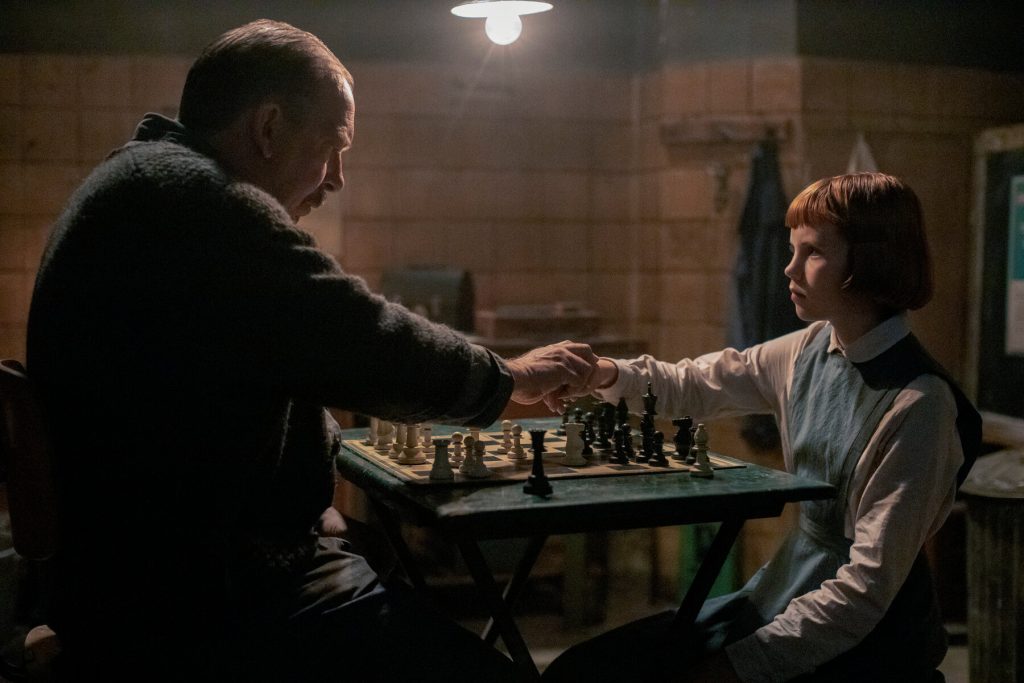 It is 1960s. Young and brilliant chess player Elizabeth Harmon rushes through a luxurious hotel to face the Soviet world champion in the nerve-wracking battle of great minds, yet not everything goes as well as she would wish for. When she feels she is on the ropes, Beth begins to reminisce about all the events that had made the chess prodigy she was as a child into the pretender for the title of world champion. Thus, we observe how nine-year-old Beth is sent to an orphanage after surviving a car crash that took her mother. We see how she and other young girls are being prepared to live in the patriarchal world of adults. We watch as the orphanage’s janitor instils passion for chess in her mind and supports her in her first real steps toward international recognition. We witness with horror Beth’s growing addiction to tranquilizers that help her keep her roaming imagination in check. We experience the imaginary chess games created by her drug-fuelled mind. While at the same time we wonder what else fate will bring to this fragile and brilliant little girl. 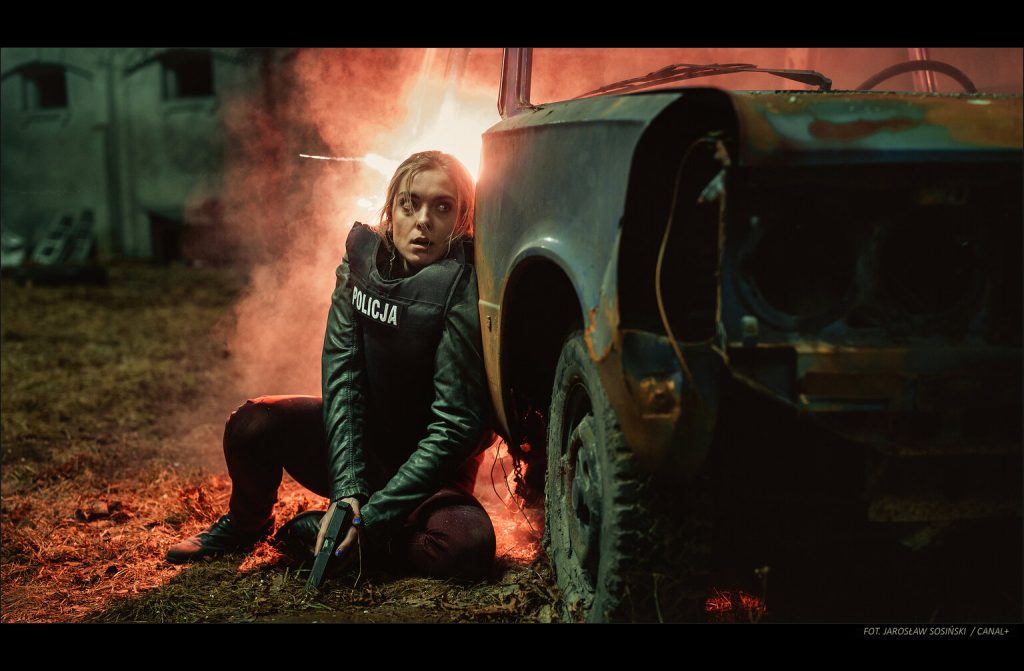 Adam Kruk (literally Raven in Polish) is a tough-as-nails, uncompromising police officer, struggling with his own fragile psyche and an inability to control the rage that makes his blood boil. Together with his colleagues he declares a brutal war on illegal tobacco growers and dealers in the Podlasie region, near the Belarussian border. The gangsters feel impunity and are becoming more and more audacious, leading the police around by the nose. This is not the only case occupying Kruk’s preoccupied mind, as he and his new partner, Justyna, try to capture a nasty serial killer who targets red-haired women. If only Kruk could, he would gladly kill with his bare hands all the bastards who see themselves above the law – but he is bound both by the Polish law he swore to protect and his marital and parental responsibilities. Trying to contain his inner demons, Kruk desperately fights for a better world for his family and anyone else who deserves it. But these cases are different and will challenge him as none other he dealt with before. 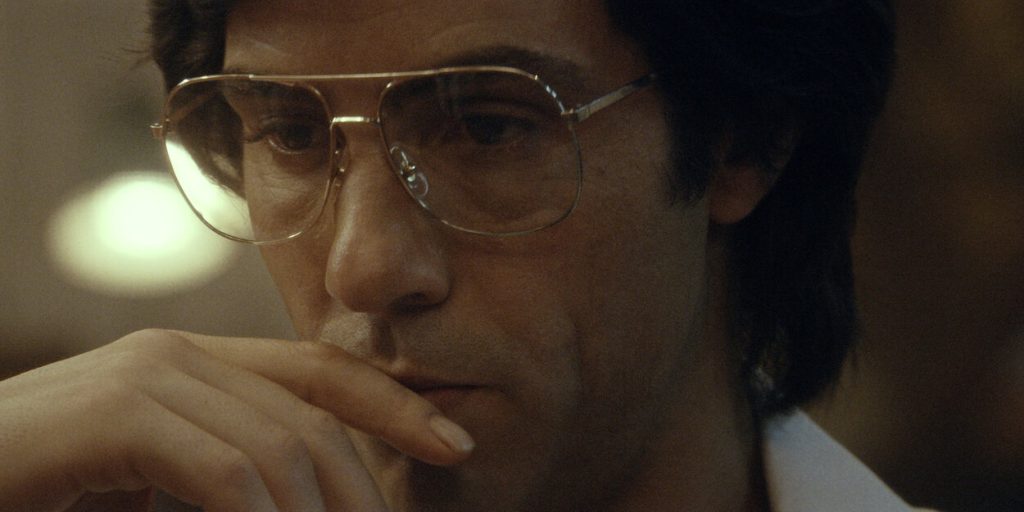 Paris, 1997. Charles Sobhraj, notoriously manipulative serial killer who enjoys freedom in the French capital, agrees to give an interview to an American journalist. When asked if he considers himself a dangerous man, the man simply answers that no court has yet proven him guilty. And that it likely will not change. We are transported to 1970s Bangkok where Sobhraj, posing to be a professional gem salesman, and his girlfriend lure American and European tourists looking for a spiritual renewal and/or hedonistic fun into their trap. Some victims are simply drugged with different concoctions slipped into their drinks, and then robbed of their passports, jewellery and money. Others are not so lucky and are murdered in cold blood, their bodies disposed of, to leave no trace behind. However, Sobhraj realizes that his deeds may not go unpunished after all when a young Dutch diplomat starts to investigate a mysterious disappearance of a certain Dutch tourist couple. Thus begins a battle that will probably end badly for both men.

Beginning of 1950s, America, the land of the free. Livia and Henry eagerly leave their home in North Carolina, still subdued by racist sentiment, and head northwest to the decidedly more open and progressive California. They have already bought a beautiful suburban house and now intend to settle there with their two lovely young daughters who deserve to grow up in a world devoid of prejudice. The trouble is, they feel unwelcomed the minute they arrive in the neighbourhood that was to become their asylum. The reason is, it is all white, and what’s more – the residents clearly stipulated in the sales agreement that “no persons of Negro blood or heritage will occupy the premises.” The sales agent insists these are just words, and that they can be easily erased. She is right, though it is far more difficult to change the habits of the people who were brought up with a particular vision of the world in their heads. Livia thus spends her first night in this “brave new world” loading bullets into her gun. She does not realize, however, that it is not the neighbours she should be afraid of – there is also something wrong with the house itself. 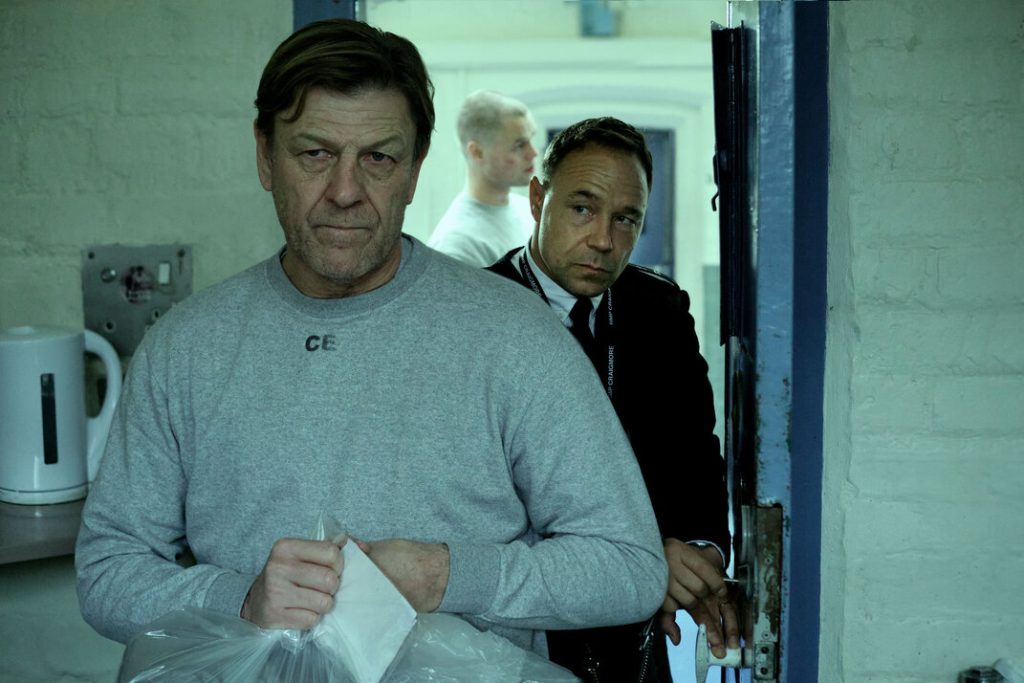 Mark was a teacher and an ordinary lad, like you and me, who loved, suffered, succeeded, tried his best, made mistakes, and failed miserably a number of times. His ordinariness did not seem to be a risk to anyone right up to the point when he killed a man. Drunk driving. Four-year sentence. The end of life as he knew it. Future uncertain. We meet Mark when he and other criminals are driven to the prison where they will serve their time. Mark is somewhat looking forward to that; he needs to experience penance and through it escape his guilt-ridden conscience and imagination. When they arrive, there are dozens of questions and rules to be followed. And one phone call, two minutes long. And numerous first times. First lonely night in a cell. First “roommate.” First attacks by other convicts. Mark gets slowly accustomed to this purgatory, especially that he is supervised by Eric, a guard with a heart who would like prisoners to retain some of their former human dignity. However, as it turns out, he is also in a kind of prison - one without bars and without criminal sentences. 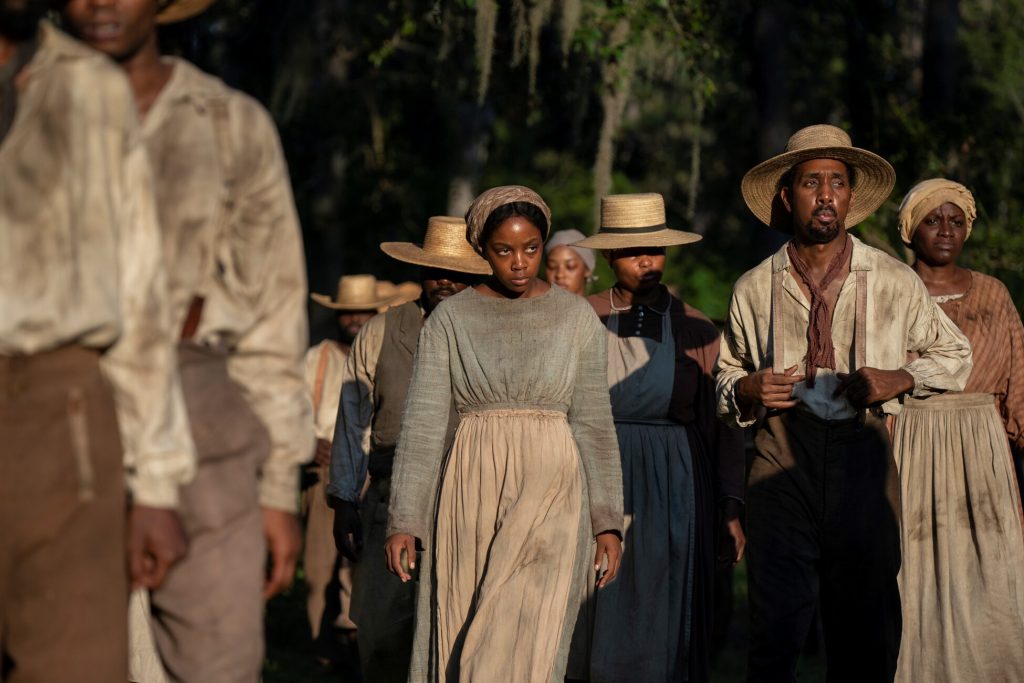 The series is set in an alternate reality in which the legendary American Underground Railroad – in the real world a complex network of secret routes, safe houses and individuals willing to risk their lives to assist runaway African American plantation slaves to get safely into Canada – turns out to be a literal subterranean train running between North and South. The way the slaves’ lives are depicted on the screen is nevertheless nothing but real. This is why Cora and Caesar decide to escape in the first place, leaving behind a world of sweat, blood and tears, of whips and rapes and unimaginable suffering on the hands of the white masters who consider people with a different skin colour their rightful property. Cora and Caesar are followed by a ruthless slave hunter called Ridgeway who takes pride in the fact that he captured all the slaves he was ever after. Well, almost all, one got away, years before – and it was Cora’s mother. Will Cora succeed as well? Will love conquer hate?

WELCOME TO UTMARK: EYE FOR AN EYE 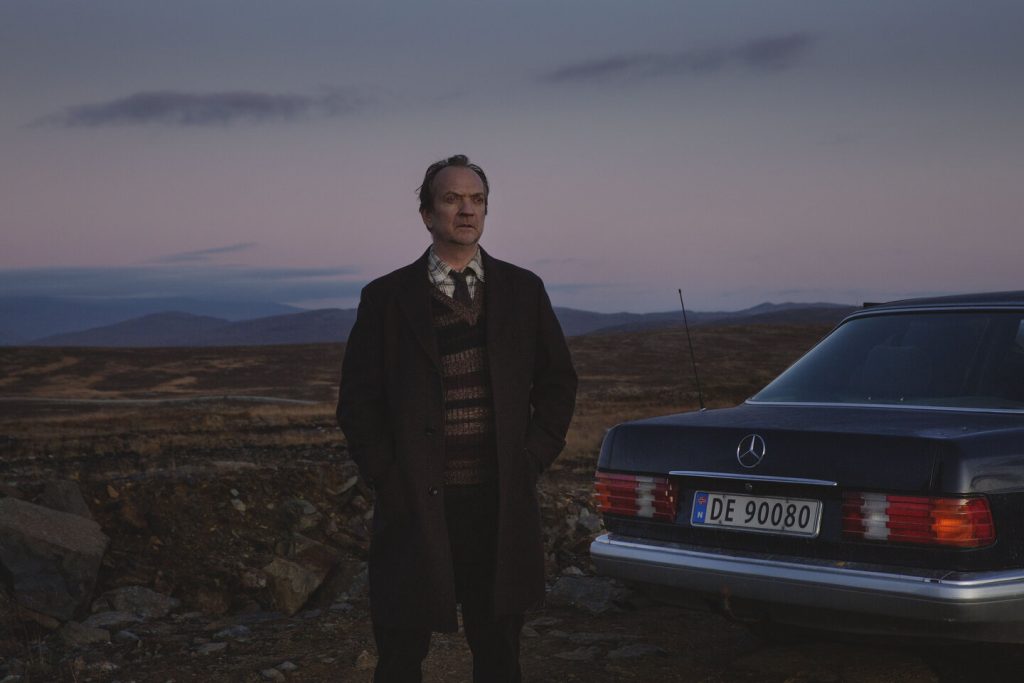 In the far Norwegian north, in the town of Utmark, life goes on, as normally as can be expected of such a place. Young boys try to figure out how to get the girls’ attention. A friendly police officer educates children how difficult it is to devote one’s life to the idea of serving and protecting the community. A former beauty queen cheats on her husband, just to feel alive for a moment. A newly arrived optimistic schoolteacher attempts to view that place at the end of the world through rose-tinted glasses. A shopkeeper talks to her deceased husband in a disturbing demonic voice. Good-natured, yet quick-tempered alcoholic sheep farmer threatens a proud descendant of the indigenous Sámi people that he will get his revenge on the man’s bloodthirsty sheep-killing dog. This charming town, surrounded by a nature that is wholly indifferent to all human struggles, is full of small betrayals and concealed dramas and traumas that make people feel emotional, furious, toxic, melancholic, desperate and longing for some human warmth and understanding. Simple people with big dreams and complicated desires, all trying to cope with the challenges of their daily lives.