MONSTERS, HYBRIDS, CLONES IN THE CENTRE OF CONTEMPORARY ART IN TORUŃ

Starting October 29, 2021, Toruń will be the place of an extraordinary artistic event. For the first time in Poland, there will be a chance to see the works of the world-renowned Australian sculptor Patricia Piccinini, including the highly acclaimed sculptures presented at the Venice Biennale. The exhibition is entitled „Patricia Piccinini. We Are!" and is organized by the World Art Foundation, founded in 2006 by director David Lynch and director of the EnergaCAMERIMAGE Film Festival Marek Żydowicz, who is the exhibition’s curator. Sculptures, installations and video presentations of the artist will be presented at the Centre of Contemporary Art "Znaki Czasu" in Toruń and take up the space of about 2000 m2. One of the artist’s sculptures will have its world premiere at the exhibition in Toruń. The exhibition will be accompanied by a film review, meetings with artists, discussions with experts and workshops. 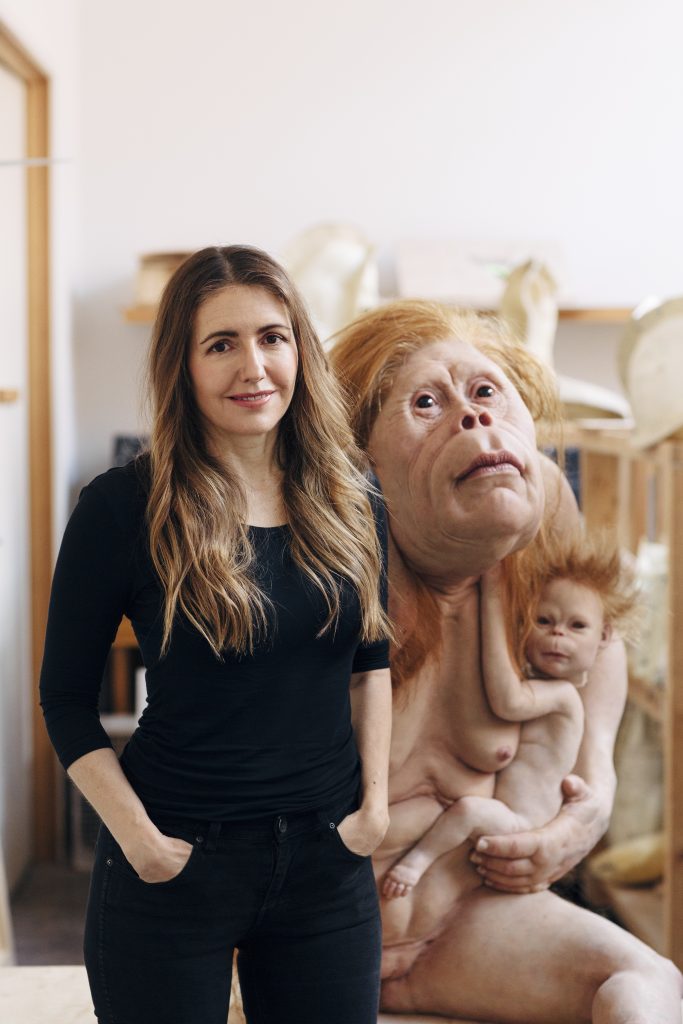 Patricia Piccinini (born in 1965) has been arousing attention and enthusiasm all over the world with her art for years. Her sensuous, magical, disturbingly bizarre, hyperrealist sculptures force us to ask questions and arouse controversy. The large-scale installations are played out amidst cross-currents of science fiction, natural science and feminism. The exhibition in Toruń will invite the audience on a marvelous journey through a series of vivid scenes where hybrid creatures interact in everyday situations. With silicone, fibreglass, nylon, plastic and human hair Piccinini creates lifelike futuristic narratives that raise highly relevant issues of existence, climate and technology. All this allow the artist to achieve an extremely realistic form of sculptures that never leave the audience indifferent.

Exploring the future
In Piccinini's transcending universe, digital and biotechnological opportunities have shaped new hybrid life forms. Piccinini depicts the contrasts in her art, where the playful and the imaginative meet the bizarre and the horrific. Piccinini celebrates everything that is ‘different’ and challenges boundaries among humans, animals and plants. Here we find poetry and beauty in the connected, the strange and the diverse. She invites us to fantasize over the possible communities and kinships the future technologies will create across species. 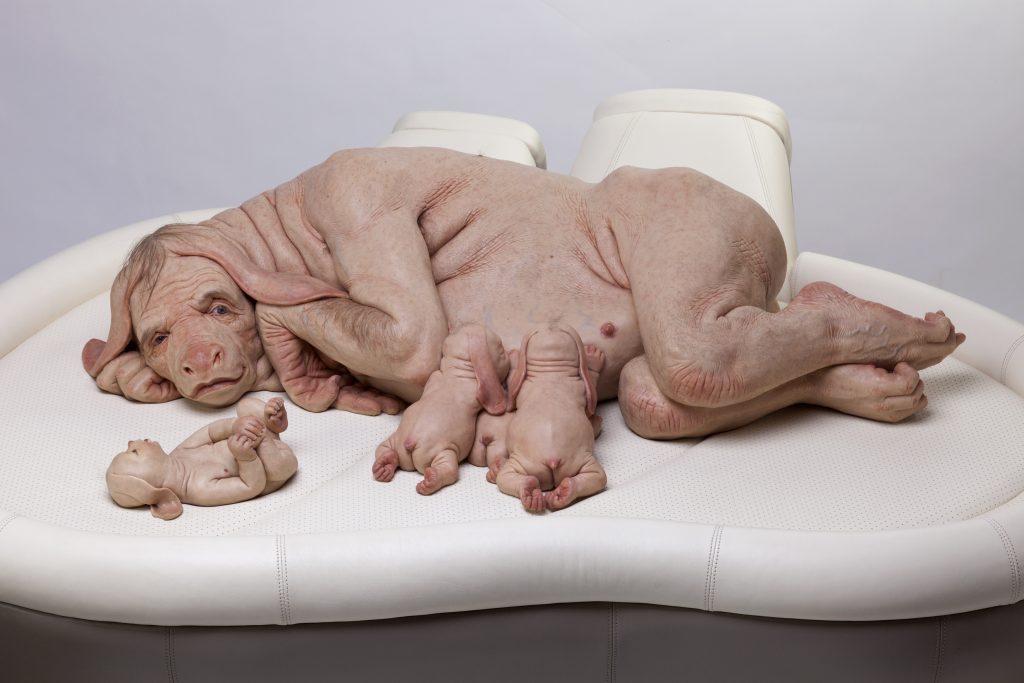 Patricia Piccinini, The Young Family, 2002.
photo by Graham Baring. Courtesy of the artist

Surviving of the caring
Patricia Piccinini’s artistic practice is embedded in a firm commitment to environmental and eco-feminist issues. In sensuous, complex works Piccinini investigates how we live and forge relations in an era when the natural and the artificial connect in new ways. Her works involve ethical messages about empathy and care for all the creatures and plants we share this earth with – and for the still unknown beings that will live among us in the future. Her universe offers dreams and hopes of a future full of loving interspecies kinships and invites us to imagine the world anew.

About the artist
Patricia Piccinini was born in 1965 in Freetown, Sierra Leone, West Africa. In 1972, the family emigrated to Australia, where Piccinini grew up. Graduate of the Victorian College of Arts in Melbourne, where she has been a professor since 2017, previously obtaining an honorary doctorate from the University of Melbourne (2016). Receiver of a Lifetime Achievement Award from Melbourne Art Foundation in 2014. Her practice encompasses sculpture, photography, video and drawing and examines the nebulous boundary between the artificial and the natural in contemporary culture. Her work revolves around painting, video, sound, installations, digital prints and sculpture. In 2016, she was named by "The Art Newspaper" the most popular contemporary artist in the world. 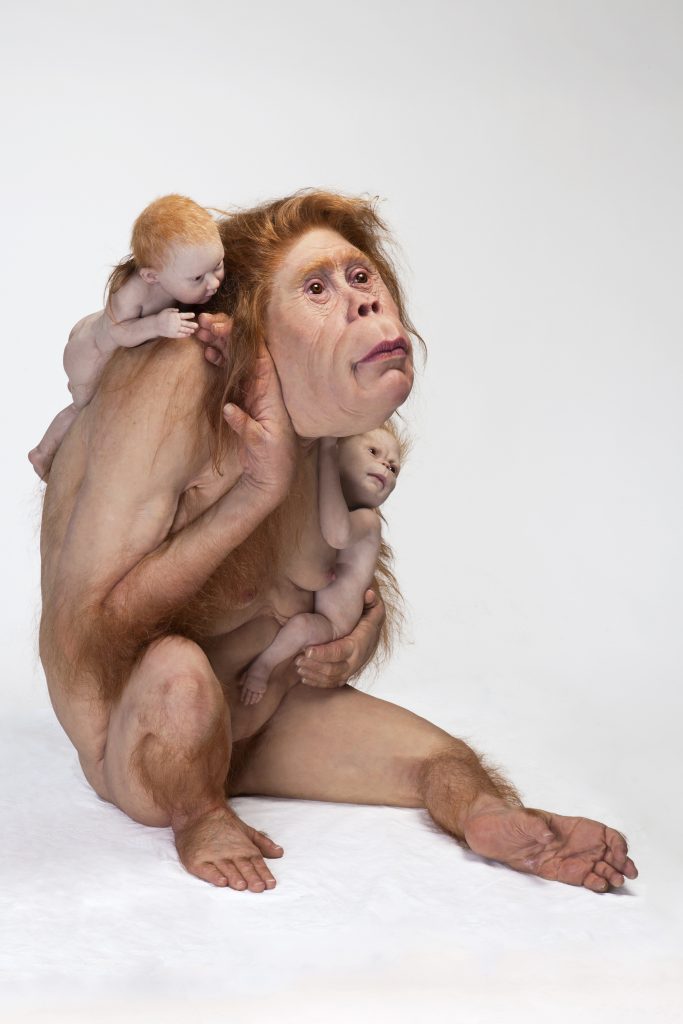 About the Foundation
The World Art Foundation was established in 2006 in Łódź in order to revitalize the ruined buildings of the former EC-1 East Heat and Power Plant in Łódź and, as a result, transform them into the David Lynch Film Center. It was founded by the renowned American director – David Lynch and the director of the EnergaCAMERIMAGE Festival – Marek Żydowicz. Today, the National Center for Film Culture is located in EC-1 East, and the architectural design inspired by the seat of the Space Guild from the 1984 film Dune by David Lynch was awarded the prestigious title Bryła Roku in 2013.

Since 2010, the Foundation has been carrying out its mission in the Kujawsko-Pomorskie Region. In its profile, it focused on co-organizing cultural events related to film, photography, painting, and other fields of art. So far, it was a co-organizer, partner or sponsor of such events as: an exhibition of photographs by Bryan Adams entitled Exposed in Toruń (2015/2016), exhibition of artifacts with a film review entitled David Cronenberg: Evolution (2016/2017), David Lynch's exhibition Silence and Dynamism (2017/2018), photography exhibition Gregory Crewdson. Cathedral of the Pines (2017/2018), Artuum Mobile: The World of Saskia Boddeke & Peter Greenaway exhibition (2019/2020) and recently Helmut Newton. I like strong women... (2020/2021). In 2016, the Foundation became involved in the organization of the "Bella Skyway" Festival, financially supporting the project of the installation by Dutch artist Ivo Schoofs, called Large Pendulum Wave, presented in the picturesque ruins of the monastery at Dominikańska Street in Toruń. The Foundation also actively supports educational projects aimed at the local community, such as: Sztuka Wyboru. Camera! Action! Reaction! (2015), Filmmaking of history - video essay workshops, educational meetings, film review and competition (2016-2017), Why do we need freedom? – film screenings and workshops for young people (2018) or Alternative walks around Toruń (2019-2020).

The exhibition in Toruń is Patricia Piccinini’s first solo show in Poland.

The exhibition is co-organized by:
Tumult Foundation and the EnergaCAMERIMAGE International Film Festival,
the City of Toruń, and the Centre of Contemporary Art "Znaki Czasu" in Toruń.

The main partner:
Marshal Office of the Kujawsko-Pomorskie Voivodeship.

Partners:
European Film Center CAMERIMAGE,
The Institute for Cultural Exchange in Tübingen (Germany)
and the ARKEN Museum of Modern Art in Ishøj (Denmark).