We are pleased to let you know that the EnergaCAMERIMAGE Festival has been included in the list of 50 Film Festivals Worth the Entry Fee in 2020. The list was prepared by MovieMaker, the prestigious American magazine, and the FilmFreeway platform. It includes film events from around the world, with only three of them held in Poland, which makes us all the more proud and satisfied.

After all doubts related to the risk of changing the location of the Festival and moving it to Toruń, this distinction gives us lots of motivation, and the feeling of a job well-done confirming that it was the right decision. In the end, Toruń turned out to be a lucky place for all of us.

Last year's edition of EnergaCAMERIMAGE proved to be a great success. Of the 220 films presented in Toruń, many have gained international publicity and recognition from both the public and critics. We had the pleasure of hosting great film artists, such as Darren Aronofsky, John Bailey, Danny DeVito, Mike Figgis, Richard Gere, Peter Greenaway, Josh Hartnett, Agnieszka Holland, Carol Littleton, Lech Majewski, Edward Norton, Robert Richardson, Jan Roelfs, Alik Sakharov, Lawrence Sher, Vittorio Storaro, Quentin Tarantino and many, many more. In addition to film screenings, Festival guests could participate in a number of inspiring accompanying events, such as Q&As, seminars, workshops, discussions and other smaller and larger meetings, held in five major Festival locations, and in the evenings party in the Festival club or at numerous company sponsored dinners.

All these advantages were noticed by the MovieMaker and FilmFreeway’s team responsible for this year's list. In the justification we can read that, in addition to great artists that came to our Festival, we are also regularly visited by representatives of leading film industry companies from around the world currently calling the shots in film production technologies. All that makes EnergaCAMERIMAGE a great meeting spot and perfect space for exchanging creative ideas for both aspiring and experienced filmmakers or simply cinema lovers that come to us from all around the globe. The list’s creators appreciated the rich program of accompanying events, as well as the Camerimage Market, which each year presents the latest technological novelties related to film production. We cannot forget about the beauty of the Toruń’s Old Town, which made an excellent background for Festival events, creating a characteristic and unique atmosphere. 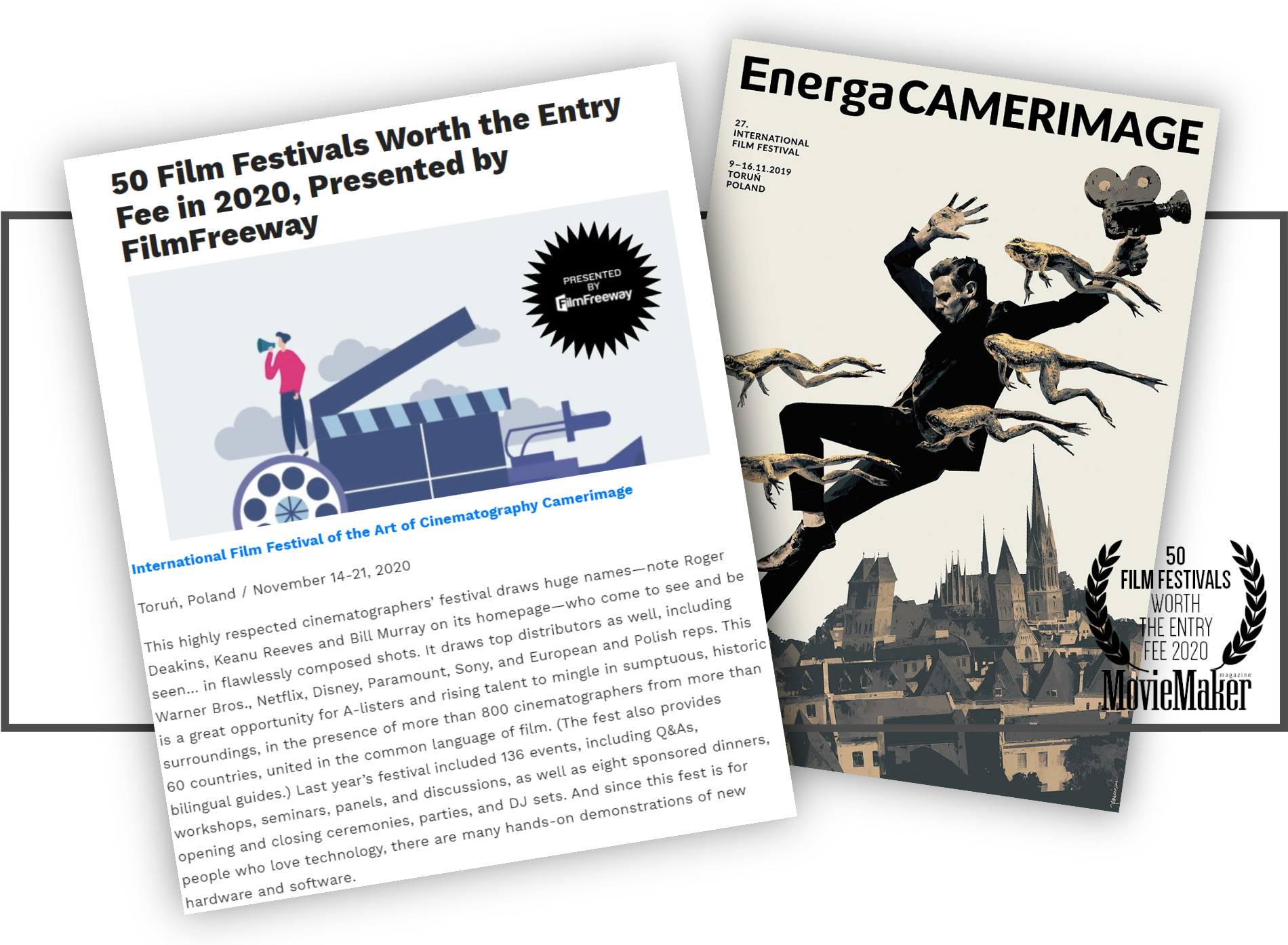 The whole list of festivals can be found HERE
(graphic © EnergaCAMERIMAGE)

Despite the difficult times in which we all now have to function, we deeply believe that we will overcome all the obstacles we face so that we will all be able to meet in Toruń this year, warming the cold November days (and nights) at the 28th edition of the EnergaCAMERIMAGE Festival, which is definitely going to be worth the entry fee. Keep your fingers crossed and, hopefully, see you in November!

The 28th edition of the EnergaCAMERIMAGE Festival
is planned to be held 14-21 November, 2020 in Toruń.